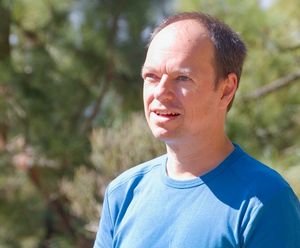 Inner images have occupied me all my life. In my early childhood, I sometimes imagined the 15-minute walk to my elementary school step by step, with all the details. And if a situation at school had not gone optimally, I very often recreated this situation inwardly – and then experienced it within myself as I would have liked it to be! In my childhood I sometimes dismissed this as pointless daydreaming, and at some point even tried to get rid of it consistently. It was only much later that I discovered that this is a very essential technique from hypnosis and NLP.

When I was about 12 years old, I read my first “spiritual” book, Siddhartha by Hermann Hesse, and dealt extensively with lucid dreaming. In these dreams you realize that you are dreaming, and then you also learn to actively change dreams and create them yourself. So I read all the books and articles I could find at the time (there was no Internet back then…) – and then wrote a pamphlet in a loose-leaf binder about 40 typewritten pages long, entitled Dream and Consciousness, in which I presented, among other things, the most important techniques for learning lucid dreaming.

Excursions into the worlds of fantasy followed, through numerous novels and also fantasy role-playing games. The latter interested me mainly on the meta-level: in my own little fan magazine I provided other players with new ideas and whole adventure episodes for several years. In fantasy role-playing games, everyone in the group reenacts scenes in their heads, in which they are constantly faced with new problems and challenges – and learn to solve them with the most creative ideas possible. Again, super visualization training, as I found out later.

During this time, many books impressed and influenced me, such as Dr. Joseph Murphy: The Power of Your Subconscious, The Man with Two Lives by Robert A. Monroe, and also Napoleon Hill: Think and Grow Rich. Then I read Autobiography of a Yogi by Paramhansa Yogananda and became his disciple, initiated by Swami Kriyananda.

After school, I spent three years at Ananda Assisi, a meditation and yoga center founded by Kriyananda in Italy, where I learned Kriya Yoga and other meditation techniques as well as creative marketing, which I later used professionally as an independent advertising designer and consultant back in Germany.

This was followed by the elaborate production of an educational and adventure game for children in a fantasy world composed of thousands of manually post-processed photos. Although the product received very good reviews in the press and even ended up in distribution at Karstadt, I ran up 150,000 DM in debt due to the long and expensive development time. In retrospect, this was one of the best experiences of my life, because…

With my brother I founded a contact agency on the Internet. After a good start I visualized daily success and growth. And that worked very well! Within a few months I was debt free. In terms of work, I mainly took over the part of internet marketing and learned a lot about employee management and cooperation strategies in the good seven years.

But at some point, the company’s sales declined and it was time for something new. Spurred on by the good sales of a self-produced travel video, I ventured to turn my rediscovered film hobby into a career and produced Internet videos for companies for the next six years. Here, too, it helped enormously to put together the scenes to be produced in my head beforehand, in order to then “re-film” them, so to speak, from this visualization.

Creative work can be quite stressful! To escape the threat of burnout, I remembered my origins and founded start2dream.de, a publishing house for guided imageries. Working with them relaxed me enormously, gave me new strength and perspectives.

Thus it was obvious to deepen these topics also in two training directions, on the one hand an extensive hypnosis training in Cologne, Hanover and Darmstadt with the renowned Thermedius institute and on the other hand in Cologne as a relaxation pedagogue with course leader certificates for autogenous training after J.H. Schultz, progressive muscle relaxation (PMR) after Edmund Jacobson and multimodal stress mastering after Lazarus, Meichenbaum among other things.

In the following years I produced more than 80 guided imageries in my publishing house start2dream.

Since 2019, I focused my work on the development and spreading of the energy and healing technique Healer & Creator, which I myself already used for many years in my own life.

Since 2020, I paid much more attention to my inner self than before, got to know my spirit guides and have been writing many blog articles and books since then. The world upheaval led, as with so many, to a particularly rapid spritual healing and growth and becomes my greatest intuitive creative phase to date.